Trace, this ones for you!

This coming Monday is Canadian Thanksgiving.

A few years ago I was stuck between a rock and a hard place. The rock being my L-O-V-E for the traditional family dressing that has been passed down through the generations. The hard place being my pregnant belly. You see, the preggo are advised NOT to eat stuffing cooked IN a bird. Salmonella or some shite.  Anyhoo, the future Godparents of my fabulous daughter were hosting an expat-style Thanksgiving (ironic since most of the expats in attendance have no such thing in their home countries, but the idea is just so darn catchy!!!) 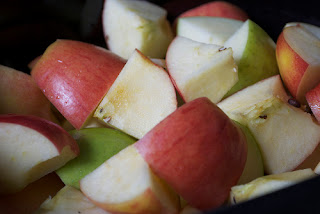 I was in charge of the bird. I knew that my Grandmother's dressing (a recipe I will NOT be giving out) needed to be prepped and cooked outside of the bird (insert dead relatives turning in their graves here). Then, inspired by a video I had seen for a "Man-Style BBQ Chicken" involving the insertion of a tallboy beer can into the cavity of a chicken thereby essentially steaming the bird from the inside whilst cooking, I had a revelation.


I quartered a heap of apples and stuffed as many as I could into that big ol' organic turkey. The premise was the same (apples steaming the bird from inside) but here is where it differed; when basting draw juice from the apples inside the bird. The sugar from the apples effectively caramelizes the outside of the bird resulting the most beautiful golden brown turkey you have ever seen. And it is SOOOOOO moist. The gravy is both savoury and slightly sweet. Delightful!

Last year I insisted we abandon carving the turkey in the old fashion for a new style. I know, how Victorian of me, right?! About my discoveries: the internet is awfully humbling and I have realized roughly several gagillion-million people also stuff their birds with apples. Even more carve in the "new fashion" so here it is - I am sure your way is great, but this way is better: How to carve a Turkey

K, so since I have had a few glasses of wine I'll give you one last of my Thanksgiving secrets: a dram of Grand Marnier in homemade cranberry sauce is TO DIE FOR!
Happy Thanksgiving everyone :)
Posted by ag.gray.gate at 7:17 AM