I have that old familiar itch. So does my husband. It's not what you think, not that 7 year itch, but the kind one gets when you are bitten by the travel bug. Before we were married we had both travelled to places in and around Australia and Europe separately. The places we travelled after we were married you could count on one hand.

Then last year Mike and I stumbled upon a seat sale to Japan - $420 round trip/each + taxes for two weeks. It was an incredible deal - if I had not been on the trip myself, I would have said it was too good to believe! Add to this spectacular price the fact that Mike's brother lives in Tokyo and we had a place to stay I bought the tickets pretty much on the spot.

Our mothers graciously flew from Alberta to Vancouver and lived in our home with our kids for one week each. A huge blessing. Though, I was fairly reluctant to leave Isla. At the time she could have flown for free, but we weren't sure how easy or difficult travelling with a 22month old in Tokyo would have been. In the end it was really nice to spend two weeks of one on one time together, something we hadn't done as a couple in over 5 years!

Japan was AMAZING! We travelled as far and wide as was possible in two weeks. From Tokyo to the Sea of Japan, Osaka, Kyoto, Hiroshima, Nigata, Endoshima, Hakone and many more. The country and cities are breathtaking at the best of times, but it was fall, and especially beautiful. We saw Mt. Fuji twice in the distance on separate trips, apparently quite a feat. Ironically on the day we went to see the volcano it remained shrouded behind the cloud cover!

Now a year later I am dying to go back. My desire possibly exacerbated by the knowledge that I cannot go right now. I am actively resisting looking up seat sales on Flight Centre's website as my little family is on the cusp of a new adventure, (one I will tell you about later) and I know it will be a while before we can spend our time or our money in such a way again. 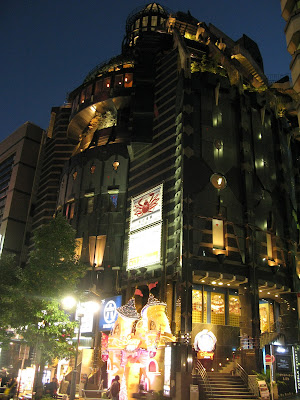