Canadian Halloween, it is the same day as American Halloween but ones costume needs to be designed in such a way that it can be worn over a snowsuit. It is either that or you are forced to wear your snowsuit over top and then what was the point of even wearing a costume? Ughhhh...I hated that as a child...that daylight Trick or Treating scene from E.T. where the kids are running door to door in their tutus and tights always made me wicked jealous.  That being said I still had my love on for Halloween till I was in my twenties, have I mentioned that I look like I am 12?! 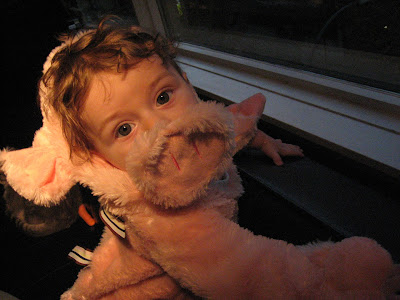 For Jack's very first Halloween I wanted to be crafty and make his costume from scratch. I loved my costumes growing up and they were never store bought. My mom made them when I was little and later we would drag out our parents old clothes or hit Value Village and assemble wonderful outfits. One year I commissioned a poodle skirt, meaning I begged and my mother made it happen. I wore that poodle skirt for three years. It was wonderful. I cannot believe I have no idea where it is now.

As the 31st of October loomed large in front of me I realized I was waaaaaay too disorganized and unmotivated to buy the scratch materials, so I improvised - still well inbounds of my "must-make" parameters.

I bought the biggest stuffed animal I could find, gutted it, and cut its face off. I then hemmed the raw edges, sewed ties onto the back and glued the nose onto a piece of cardboard with a Dummy poking through. Genius!