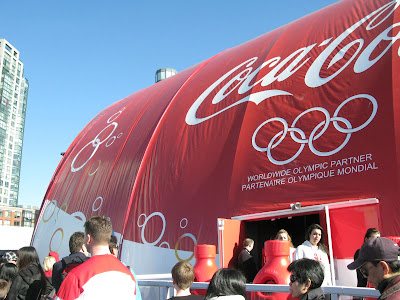 Where was I? Oh yes, lineup one was winding towards the gate and we were about to head into lineup two for the Coca-Cola Pavilion. It was all downhill from there. As my girlfriend Chrissy and I rolled two strollers and 5 children into the breach once more Jack spilled his hot chocolate into his seat. All of it. Into the seat of a stroller with a cover that cannot be removed because the manufacturers maintain that its surface can be easily cleaned with a brush and a damp cloth, of which I had neither. Awesome. I have yet to remove these stains by the way and  it is not for a lack of trying. I digress.

Lineup two heads inside, finally, I thought. But no, we are herded into lineup three. This is when I discover Isla had silently, without affect, filled her seat with her hot chocolate. So now we are in very close quarters with hundreds of people and I am all, "Look on the bright side Alicia, at least you are not claustrophobic! Her back will be to the wall in the picture. I know it looks like she shat her pants but at least it doesn't smell! Think about the picture with the torch, Jack and Isla will tell their children about this day." 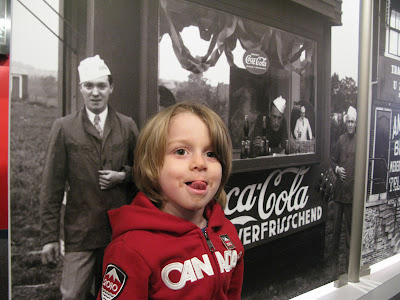 It was then one of them darted, I still can't remember who, half disappearing in to the multitudes and it all gets a little blurry. In this tiny room teeming with goodness knows who my MommaBear kicked in and I frantically grabbed for my child and fumbled my camera. This is the camera that Michael and I had gifted each other for our 5th wedding anniversary and this was by no means the first time it had been fumbled, but this was the day that it broke. Moments before I would use our too-expensive-to-replace-right-now camera to take once in a lifetime family heirloom photographs of my precious hot chocolate soaked children with the Olympic Torch. To say that my heart sank would be to downplay my sentiment enormously.

The meandering line pushed forward. Queue-mates proffered words of kindness and condolence, my face having told the tale, my wonderful friend said that she would be more than happy to take pictures of my kids too. Crestfallen I wandered on, into yet another room, then another still. Three hours in this day was feeling old and so was I.

This last room was where the coveted torch was kept. We ushered the kids into the appropriate lane (there were heaps of activities I had neither the energy nor the desire to take the kids to) and felt my heavy heart lift. Coke had provided professional photographers and individualized links to your picture online. Granted it would be flanked in advertising but I was stoked. Until, at the front of the line after HOURS of waiting, Miss Isla decided she was NOT, under any circumstances going to have her picture taken. ARE YOU KIDDING ME??!!!!

Jack had his taken. Then Mommy. Then Isla relinquished begrudgingly, but not without conditions! 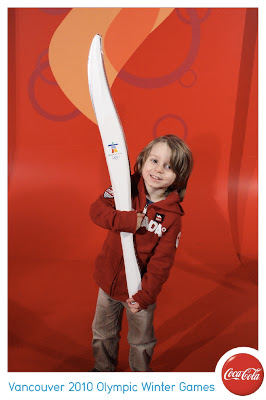 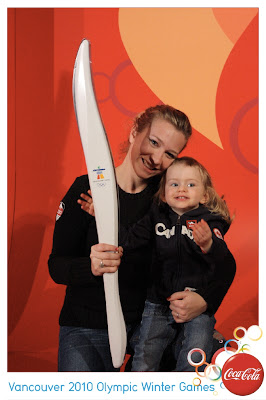 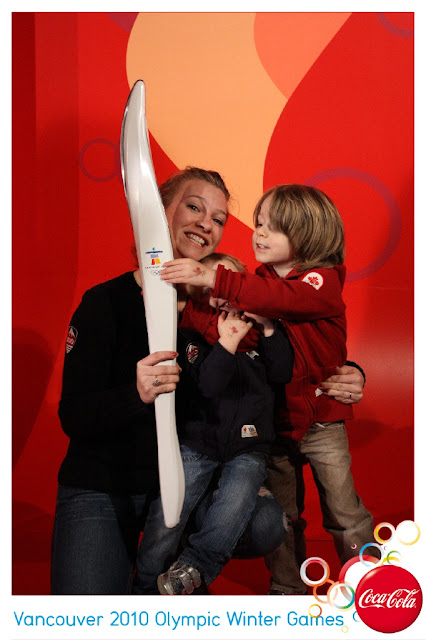 I couldn't get out of there fast enough. I just wanted to go home. I changed Isla (who was still in the throes of potty training) into the dry clothes I had brought, searched the grounds for something to sop up the now cold/congealing chocolate mess in the stroller and got ahold of my husband. He wasn't coming. Work was hectic and he wouldn't be able to get downtown before 5, which meant I still had as many hours to kill.  Awesome again.

Chrissy graciously offered to stay for lunch and so we squeezed our party of 7 into Subway. Then she (insert pang of jealousy here) took her tired babies home. I needed to get a birthday present so I walked from Gastown into downtown amid throngs of our cities guests all the way down Robson. My children had fallen asleep when I ran into Jack's godfather. I saw his camera and asked where he had been. The Cauldron. Great. I would take the kids when they woke and steal his photos, his would be better anyway! I told him about the adventure our day had been, and yet again in an attempt to be optimistic I spouted, "Well, at least she didn't pee, right?!"

Fast forward to the GAP. Browsing through the racks of clothing I can hear my precious cargo stirring in the stroller. I notice a puddle under Isla's seat. A trifecta of AWESOME!!! I am out of dry clothes so I buy her an uber cute pair of purple skinny jeans on sale. They in no way go with her outfit and I practically have to wrestle them onto her.

It is now 5 o'clock, we sit outside the Gap on Robson, leaning against the window, awaiting Michael's imminent arrival. Isla is digging the tunes. She has a sizing sticker half hanging off her cheek. It looks like a microphone. She dances, like no one is watching, hands on her hips, her recent skullet still shorn close, wearing her new jeans and a terribly mismatched olympic sweater, and begins to scoop at the air. Big grasping scoops as though she is wafting some unnoticed scent towards her torso, then over her face. It was hysterical and very much to the amusement of prolific amounts of tourists passing by. She honestly looked like a tiny crazy person and her innocence washed away the stress of the day.

I wish I could have taken a picture to share with you, but the latter half of this day will have to be passed down through the good old fashioned art of story telling alone.
Posted by ag.gray.gate at 12:41 PM