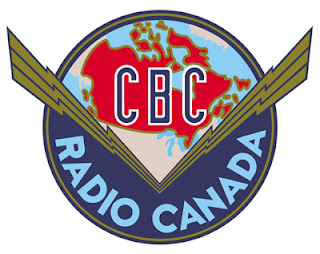 I have a longstanding love affair with CBC Radio 1. It began innocently enough as a young girl in my grandparents home where it was a constant not-so-white-noise in the background. On hot summer days the sounds from my grandmothers antique 35 watt Motorola radio could be heard drifting out of the kitchen. The wonderful cadence and vocal tones of their hosts and story tellers, every half hour the regular musical cues aloft in the house. The sound of the 10 o'clock count takes me back there everyday. To Jintie's garden and afternoon tea in the seat that was my mother's when she was young.

On road trips with my parents we would listen to Radio 1 as long as we could get a signal. A signal was good, it meant postponing the inevitable Glen and Jeanie duet to Blue Rodeo/Conway Twitty/Johnny Cash/... or the like that I dreaded as a teenager. Life is funny that way. I would give almost anything to sit in that backseat and give an audience once more.

Later, at my husband's family cabin, the summer CBC found me all over again, rekindling the passion. My grandmother had since passed away and the infamous radio had been bequeathed to me. It sat patiently and quietly in my basement room at my parents house. Years passed and I finally brought the 6X12U to Vancouver where it found its new home on my kitchen counter. The radio became my young family's morning ritual with Jack and Isla chiming in excitedly, "he/she said Canada lives here, we live in Canada too!".

Now in Rossland, on the living room side table, my beloved radio sits silent once more. There are no AM signals here nestled between the mountains. Instead I have added an app to the iphone. Streaming FM radio live over the internet ushers in the old tradition of a radio-coloured backdrop in a new way, ensuring our home is filled with story telling and music from across the land.