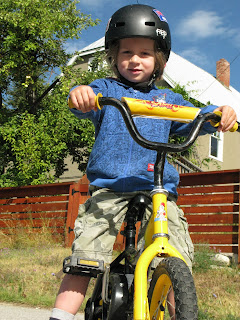 This morning Jack came out of his room smiling from ear to ear. He had had a dream that he was Astro Boy. I am pretty sure that this was a direct result of his younger sister having declared she is Astro Boy and introducing herself as such. All day, everyday. Which is a change from when she decided a few months back that her name was Missy Pie. When we ask about "Missy Pie" she says that it is still her name but that she is now "Isla AstroBoy MissyPie..." "What about Meat-a-saurus" I ask. When Isla started solids we began to call her Meat-a-saurus at mealtimes because of her affinity for all things flesh. "Meat-a-saurus" she says pointing to her temple, "lives in my brain". I almost peed.

Now Jack is dreaming he is Astro, he hears about him a lot! I wondered if that meant he had dreamt his first flying dream. It hadn't. Too bad, I cannot wait to hear about these.  I used to dream so vividly and flying dreams were by far my favourite. I scarcely remember my dreams now, unless they are guilt-filled and at that point I would rather not since I have a hard enough time forgiving myself during the day. Anyhoo. Jack had another first today though. A wonderful neighbour and friend passed along a bike to us. Now Jack has been riding a Strider for the past 6 months and he was ready to make the move. In less than 10 minutes he was up and riding! No training wheels or anything. His dad and I were pretty much elated! 15 minutes in he has mastered his new ride and tomorrow is his first bike race at the Rubberhead - we are in Rossland after all!