I am thrilled to present the first guest post on ag.gray.gate! Brandie Weikle was featured earlier this week in the Artist Homage and without further adieu here is her article itself:


The kids are heading back to school this week, and I can’t help but yearn for some of that same newness that September brings when you’re young. Nervous tummies aside, who can forget the sense of possibility that came with that backpack of empty duo-tangs?

I took each of my boys, Cameron, 7, and little Alister, 3, on separate walks down to the little stationary shop on Bloor this weekend. My little guy is bound for Montessori school and in need of his first pencil case. And my first-born, now a “Grade Two-er,” needed the ritual purchase of new pencils, sharpener and glue stick, almost as much as he needed the reassurance that he was tall enough for second grade.

I’d love some new school supplies almost as much as a pair of nude platform pumps to complement my fall wardrobe. But while I don’t need a new binder (or, I guess, even the shoes - drat) I can satisfy that yearning with art supplies. So, I got a few new drawing pencils this weekend.

Because I’ve spent my whole career in journalism, and consider myself the most beginner of visual artists, it was a surprise when my sister wanted to feature me on her blog’s new weekly artist homage (secretly I’m thinking she was running out of people) and have me guest post the next day. 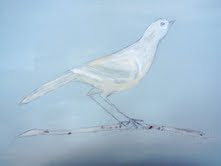 But then I got to thinking that maybe the subject of art doesn’t have to be that far off my usually parenting beat (I edit two websites for the Toronto Star, and write about a blog about parenting). All kids make art and all parents are capable of making art with their children.


When I was a little girl I was apparently quite easy to entertain with paper and crayons. I was forever trying to make snow globes out of jam jars and tiny bits of crumpled-up tin foil. I entered earnest little portraits of my best friend in the country fair. I painted posters to announce the rec-room premieres of my most recent plays.


Paintings by two grandparents decorated the walls of my homes growing up. In addition, we were also cottage neighbours (though we call them cabins no matter what their size out west) with artist/activist Wallis Kendal

My most vivid memories of his artwork are of the canvasses that depicted what he saw on his trips to some of the most underdeveloped parts of the world. But artistically he’s now best known for his collaboration with Sandra Bromley on the Gun Sculpture http://www.gunsculpture.com/, an anti-violence installation made of 7,000 decommissioned weapons that has been exhibited around the world, including at the UN headquarters in New York and at the Centennial Exhibition of the Nobel Peace Prize in Seoul, South Korea.

Wallis would occupy us on rainy days with papier mache projects, kept up an elaborate fantasy that there were elves in the forest surrounding the lake who we just missed meeting because it was bedtime, and let us make banana peel ice cream for a “gross-out” party. (Everyone should have an eccentric artist or two in their upbringing.)
When I was a teenager Wallis took me to buy my first proper camera, a second-hand Pentax K-1000. Then we tromped around Edmonton’s Fringe Festival so I could photograph all the colourful buskers and artists. I felt like SUCH a serious photo-journalist.
I can’t bring his artistic ability to the table, but I do cover mine in newsprint and bring the kids and their friends there to work with paint brushes, acrylic paints and canvasses that make them feel like real-deal artists.
We have kind of an awesome time. 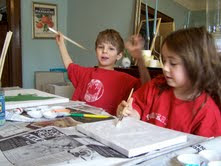 No matter how big you are, you get to create.

We’re working on a gallery in our basement stairwell. 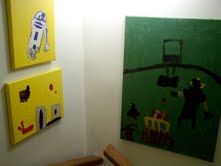 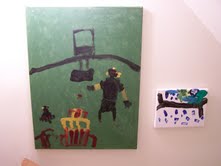 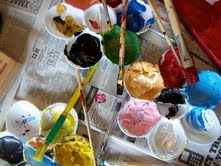 Doesn’t just looking at these supplies make you want to give it a go yourself?
I’m quite sure that the kid in you will look at a blank canvass and appreciate the possibilities.


Not a bad metaphor for life, really.