I Need a Vacation from this Vacation... 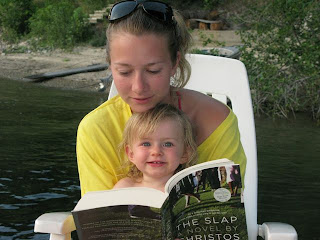 Vacations are just not the same anymore. Seldom do I get a chance to kick back and relish a novel while basking in the sun...or rather from the shade of a large umbrella! Having two toddlers running amok, crazy high on their own vacation enjoyment significantly hinders my own.

In four years Michael and I have never even so much as hired a babysitter. Close friends or family have been called on occasion when we really let go! I am deeply afflicted and suffer terribly from a case of the "You will never be able to take care of my children as well as I can"s.

It might seem incredibly selfish and distrustful, and maybe it is overbearing and overprotective, but it turns out I have good reason. Last summer I indulged myself allowing my 3 year old to play under an other's "watchful" eye. Fully engrossed in my summer reading a strange gurgling sound caught my attention. I turned around to see Jack, his face a terrifying unbreathable inch below the waters surface, his hands helplessly grasping. The one who was watching him went for a dip and he followed. He had thought that he was wearing his life jacket. Since his father and I put it on him religiously, it was like a second skin he already took for granted, he didn't bat an eye as he waded into the deep. We pulled him from the water coughing, crying and scared. I can see it all as clearly as though it were happening now and a year later I am still having nightmares.

So who knows when family vacation is gonna stop feeling like the same laundry different beach?! Meals still need to be made, babies supervised, dishes washed, et cetera et cetera. Right now vacation feels like a bizarre summer time Christmas melee complete with every inch of what one dreads about the yuletide season. Ughhhh. I'd rather stab myself with a fork in the eye.