There has been a bear in our yard almost everyday since I wrote about the bear a few weeks a go. One day I came around the side of the house to turn on the water spigot and there he was, 10 feet from me. I had startled him just as he had startled me and so he lumbered away which was nice given the alternative. 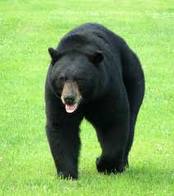 Barb had an open compost pit as many residents here in Rossland do. There seems to be some disagreement between Rosslanders as to what exactly attracts the bears, and other residents choose not to compost at all. I am a composter. I bought an easily turnable barrel style compost before we moved (since I am a beginner) and I have noticed a HUGE difference in the amount of garbage that we as a family put out since integrating it into our way of life. Garbage is collected once a week and recycling every other here in Rossland. When all the coffee grounds, fruit and veg peels, egg shells (rinsed and crushed of course) and such head into the compost it takes this family of four about a week and a half to fill one Safeway bag with garbage.

I digress, back to the bear. This composter frustrates the bear to no end and he resents having no access to what was once an once open pit for his perusal. The "animal proof" composter has been dragged all over our yard, has enormous teeth and muddy claw marks and, two nights ago after vigorously shaking and smashing the barrel the aggravated animal threw it into the street!  Later that same morning, again when I was at the water spigot, I heard Jack shouting something. I rounded the corner admonishing him for shouting only to see that he was screaming "Mom, there's a bear!" while standing several feet from one feasting on the cherries from our cherry tree. This bear did not seem perturbed in any way by my loud child, in fact all we ever saw as I ushered the kids into the house was his bear bum. 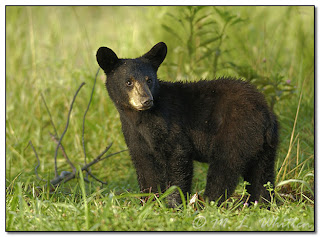 The Bear Aware  campaign has been really informative. The kids have been briefed on what to do when a bear is in the yard (talk, walk, leave the dog and go inside) and I never leave them alone outside. It is too late this year to ensure the trees do not bear (ha ha ha) fruit, next year we'll get rid of their flowers, but we do need to be more vigilant now that said fruit is ripening. After all, a fed bear is a dead bear.