Guests were coming. I was vacuuming. The kids were sleeping...or so I thought. When I shut the vacuum off however I heard the unmistakable sound of the electric toothbrush buzzing upstairs. I knew immediately who was awake. Isla.

Sugar and spice and everything nice. Heavy on the spice. Head strong and independent, brilliant and beautiful, adventurous and funny. Thus, even a briefly unsupervised Isla, can have unpredictable results. The short list: removing her diaper and its contents, consuming toothpaste in the guest room, drinking a latte, reformatting the computer, covering herself in various creams, lotions, chapsticks and lipgloss. It happens in an instant and this time was no different. 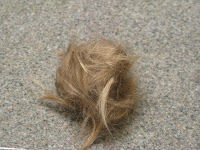 I thought I'd better get up there before she got into anything. I could hear her happily sing-songing to herself. I took the stairs two at a time. "Whatcha doin' Bean?". As she placed the toothbrush on the vanity and I scanned the bathroom for damage what I noticed took my breath. The toothbrush had been her second adventure. Earlier I had used my shears to snip a thread on a cushion when the kids first went down. Obviously I had left them out.  A large disembodied clump of hair lay on the floor. Grabbing her head I instinctively began to search the back for the missing lengths. It was all there. I took her beautiful face in my hands and saw the haircut had happened up top Friar Tuck style. She was all business in the front now. Past the point of "mullet", I learned when you can see scalp the correct term is actually "skullet". 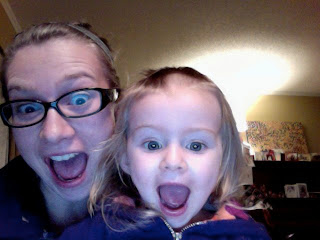 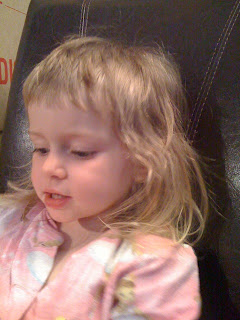 Four months later I cannot believe how long it has taken for her hair to grow back. Currently my 2 year old daughter looks like a tiny Rod Stewart. Especially in the morning. Especially after a restless, sweaty nights sleep! If not for her remarkable dexterity things could have been worse. I mean she is lucky to still have both eyes and the top of her scalp.