V is for Velma

As I mentioned in an earlier post (The Birthday Box) Isla got Jack a puppy for his birthday. We already have a Chihuahua, but he is much too crotchety and fragile to play with the knee-highs. Tiny Toby has also become somewhat of a recluse recently and we were hoping that a new puppy would ease him out of his funk. Overjoyed at the thought of a new puppy, sharing her made perfect sense to the kids and needed no further explanation. Before she even arrived we fawned over photos and named her. Now I did ask for suggestions, but Jack wanted to call her after a close family friend, then after this friends dog, and Isla just wanted to name the puppy Isla. I let them know the new puppy was called "Velma". 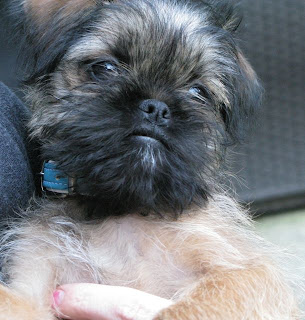 Mike and I were originally leaning toward the notion of a large dog, after all we would now have the space. But we had also always wanted a Brussels Griffon and when we came across Velma online the decision seemed to make itself.

Note to self for future reference: when packing up and moving house it is not the best time to get a new dog. Nor when planning a birthday party. And what is the point of celebrating not having anymore children in diapers when there is now a monkey-faced creature pissing and crapping all over the house? At least it is no longer officially my house, but still. Ugh. When we first got Toby he WAS the baby. We ate, slept and drank all things puppy. We were newlyweds with oodles of time and patience. I tend to be deficient in those areas at present, when I am pretty sure everything smells like poop. 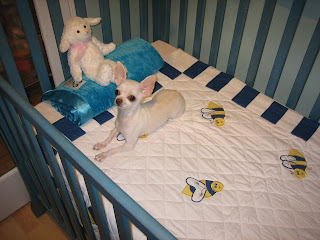 We are now kennel training her.  And she is allowed to roam the kitchen freely, but no further. These two things have made huge headway for both my sanity and her survival. And watching the kids with Miss Velma warms my heart...and there are still two more weeks to work on house breaking here. So I guess she can stay.