I find that in retrospect it is always easier to see the signs. Looking back they are like little bread crumbs along the path of experience. There have been plenty of times that I have had to say to myself "Look, the answer was right there and you weren't listening" And of course when the Voice says "Left" and I say "but first I'm gonna look a little bit on the right" that is almost always the beginning of trouble, life lessons none the less, but trouble all the same. Like when Mike and I decided to buy that time share...oops. That time the Voice was like a punch in the gut. I felt sick to my stomach, but I WANTED it! I am forever indebted to whomever wrote the buyers remorse law!

I always prefer hindsight when I can see that I was listening. Even more so when I can see Mike and I are hearing the same thing. Rossland was (and is) one of those times. He and I have wanted to move here for the better part of our marriage. We tossed around the idea interchangeably with Fernie and at times even Calgary. But moving never seemed right. Then suddenly this spring, it did. We found the house and wrote an offer, we listed our Vancouver condo and it sold by the weekend. Everything felt right. But then things began to fall apart. Our offer for one. 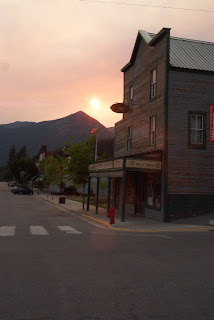 So we came back to Rossland to house hunt. Nothing seemed to fit. There were plenty of houses that we could make work and others that were lovely but would have stretched us too far. The Voice was pretty clear about not having a co-signer and I didn't want a house that we had to force ourselves into. I waited for the reeling sensation in my stomach to start, but it never did. I mean, I felt panicked at times, however at no point did I ever feel that moving to Rossland was the wrong thing to do.

Then there was the photo album. One afternoon, while Mike was working a move shift, a photo album fell out of a shelf and onto his feet. The owner had already moved out and everything left in the house was being taken to the dump. Mike picked up the album and went to add it to trash when the Voice mentioned he should hang on to it. Later in the afternoon, he almost discarded it again. Turning it over what was written on the cover took him aback. It simply said, "ROSSLAND".  In the middle of Vancouver this album had found Michael, filled with 100 year old photographs of familiar streets and brick buildings, mines and hiking trails. To say we took this as a sign would be an understatement!

This adventure is a little bit "If you build it they will come" and a little bit "the future belongs to those who believe in the beauty of their dreams". As you know we ended up getting the house that felt like a home but Mike has to travel back to his job in Vancouver. We are still working it out, but the breadcrumb path looks pretty promising!