A Cake for Isla 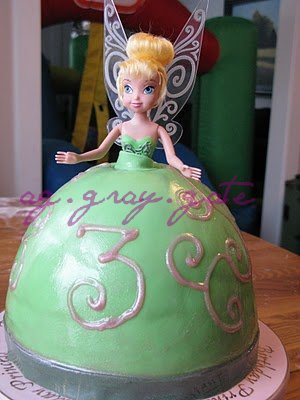 I have not a clue as to how a little girl who has virtually no exposure to the Wonderful World of Disney has such an enormous affection for all things Tinkerbell, but she does. Isla's heart on for the tiny beast appeared one day out of the blue and here it has stayed.

So, of course, for Isla's birthday I endeavoured to make a Tinkerbell cake. I had seen the photos online. I might have shown them to Isla, and now her mind was made up. It looked really difficult. The combined potential brutal honesty of two preschoolers sent shivers up my spine. It was gonna have to not suck. I was scared.

Now being cable-less has left me at a disadvantage. As far as gleaning useless information from TLC to be recalled at convenient moments I am now at a loss. Internet to the rescue! I Googled how-to videos on 5 different kinds of fondant and how to apply it. The term 'crumb coat' kept coming up...so I Googled that too. Down the rabbit hole I went.

I really wanted to make marshmallow fondant from scratch. It tastes better and doesn't have as much crap in it...then went and bought Wilton pre-made and added food colouring. The Wilton site itself was a wealth of information and I used their butter cake recipe in the end. And despite cautionary cries in chat rooms everywhere, I used my Kitchen Aid mixing bowl as a cake pan. It worked like a chizzarm!!!!


Long story short, the cake did not suck...it was all kinds of awesome, nowhere near as difficult as it looks, but every bit as pretentious! Fondant is absolutely my new favourite thing! Oh, and my three year old :)

For Jack's Birthday I plan on successfully trying my hand at these Cake Pops...