Jack pushed his best friend through a glass window the other day. There, I said it. And it could have been much worse...because the stairs were half a foot to the left. Every now and then I find I am the parent of THAT child and it is so embarrassing.

Now a few things that I know to be true about Jack; he is very intelligent and way handsome. He is kind, compassionate, patient and encourages those around him. He is empathetic to a fault, sometimes skiing away from us so he can check on that random guy who just fell over. Jack is the child who plays so inclusively I have to remind myself that he is four.


But he IS four. And sometimes he looses his shit.

On this night, loosing a game of Mario Party proved too much, and he pushed the boy who won. Unfortunately they were on a pull out bed in our television room which sent his best friend flying (thank the lord above that it was not down the flight of stairs) off the bed and through the 75-year-old-original-to-the-house-glass-door.

First things first. He should NOT have pushed his bestie. Obvious. But why, when he loose his cool so rarely, does everything seem to conspire to make the event soooo epic?! I mean when Jack gets pushed, or bitten, or some brat pulls his hair I seem to be the only witness and life goes on. But when Jack pushes his friend it happens to be the day we let them play on the pull-out (usually they sit on the green table above), sending said friend off into the air, AND through a GLASS DOOR!!!!! What the what?! Seriously?! 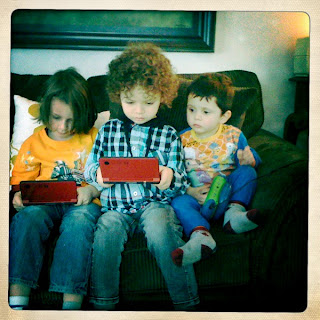 When Gramma asked Jack why he had done it he answered through tears, "I just don't know what happened...I never do stuff like that.". Jack has apologized, and all has been forgiven. He does not really grasp what could have happened (killing your bff is a pretty heavy concept) but he is paying for the glass with money from his piggybank. THAT has made a huge impact with him.

And my girlfriend still lets her baby play with mine. So there's that. Oh, and the Wii has been moved back to the playroom.