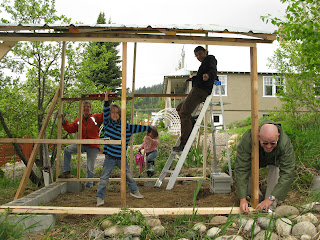 My family and I are part of a growing trend. We have backyard chickens. It all started as a good idea last spring as we took part in Rossland’s 2nd annual ‘Chicken Crawl’. At every house along the Walk chicken owners professed how easy and inexpensive constructing coops and runs with found goods could be. They all built their structures in a weekend. The Poppets really dug the hens and I was surprised just how much Mike seemed to like the idea as well.

Then a girlfriend called with actual chicks to give and suddenly there was a very real deadline looming in front of us. We began to gather ‘inexpensive found material’. Insert reality check #1 here. Not cheap. Even with a free metal roof and free siding. 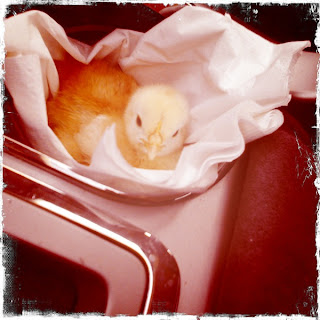 We had ourselves a good old-fashioned Amish style barn building. Check #2 - it took more way more than a weekend to finish. Family came in from Ontario one week. We sent them out to the yard and didn’t let them in till the ground was cleared, foundation level, run framed in and a roof went up. Jack’s God Parents visited the next week and together we stained, sided, and put up the hardware cloth. It really looked like a real chicken coop now! In fact so much so, that we had never seen a raccoon in our yard before and that night two came to inspect the coop that now resembled a coop! Smart little buggars. The bandits found it empty though as chicks were still inside our house. Whew!

Then there was Velma. Who quickly decided, despite her Terrier-ness, she was the mamma. Thank goodness, I thought for sure she was going to eat the little yellow fluff balls.

Last, but not least, Mike’s dad dropped by and gave the coop a once over…and a few more cross supports. Then it was time for the chick–e–boos to move on in! 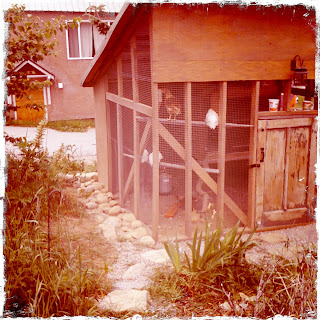 They love their coop! All it needs is a chandelier  :)
Posted by ag.gray.gate at 4:33 PM